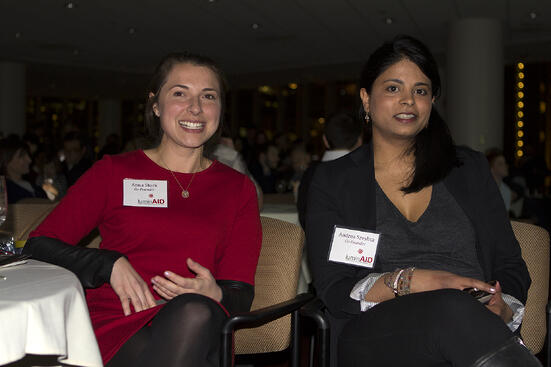 A bit of background, Andrea and Anna met in architecture school at Columbia University and first designed their light as a school project in response to the Haiti earthquake. As fate would have it, the women were in Japan one year later during the Tōhoku earthquake and experienced first-hand the desperation and chaos in complete darkness following a disaster. Having their prototypes gave Anna and Andrea the ability to see when others could not. After experiencing that emergency situation, they were committed to turning their idea into a business. Upon their return to Chicago, Anna and Andrea were able to generate momentum through business competitions and partnerships.

They started building momentum with the University of Chicago, where Andrea was a student at the Booth School of Business. LuminAID participated in the school’s Social New Venture Challenge business contest where the company won $25,000 in funding and, like other student companies competing, received strong support from the Polsky Center for Entrepreneurship and the Social Enterprise Institute, whose faculty and mentors helped the founders refine their business and pitch.

From there, in 2013, LuminAID entered the Clean Energy Challenge, the largest cleantech accelerator competition in the Midwest hosted by my organization, the Clean Energy Trust. LuminAID competed against 16 other companies and placed first in the early-stage category, receiving $100,000 in prize funding. I recall being on stage with a group of sponsors, board members and colleagues honoring Andrea, and we were all very moved by her story and excited for what the future would hold for the company. In fact, LuminAID had such a profound impact on the U.S. Department of Energy (DOE), a title sponsor of the event since 2011, that the LuminAID lights found their way to the hallways of the federal agency and became and prototypical example of how the DOE was successfully inspiring young people to become entrepreneurs.

Commonwealth Edison has been a sponsor of the Clean Energy Trust, along with the University of Chicago, since its inception in 2010. Anne Pramaggiore, the CEO of ComEd,  quickly realized the ingenuity of the LuminAID light and purchased several thousand with ComEd logos for her staff to hand out to customers far and wide. Having the endorsement of the most powerful utility CEO in the region, a fellow woman, was especially validating for the LuminAID founders.

A successful appearance on Shark Tank might not have garnered this type of support were LuminAID from Silicon Valley, but in Chicago – the City of Big Shoulders – the community embraced LuminAID as a celebration of how we are trying to transform our modern industrial city into a high-tech entrepreneurial mecca of clean energy. The women of LuminAID are doing more than building a business. They are inspiring the next generation of entrepreneurs by being one of Chicago's leaders in a clean energy revolution.

Click here to watch the recap video of LuminAID on Shark Tank!